An alien dissident escapes a cruel regime with a database of his race’s most important accomplishments. The Excalibur team try to rescue him in hopes it helps with the cure.

Probably my favourite episode of Crusade’s short run, and the most incredible part is that this episode, produced first, is probably the best episode of the lot.

There are obvious parallels to the rise of the National Socialists in Germany, however the destruction of art that doesn’t fit a certain political narrative is a theme that has been repeated throughout history – sadly we now have ISIS doing their share in the Middle East. The Maratans recognise that art can be used to question authority and the status quo, Natchok Var knows this and wants to save it for future generations to know what they lost. That Chambers understands it can be used as a tool for hope and maybe even healing for the soul for those under quarantine on Earth goes to show what power she thinks it holds. Marjean Holden delivers a powerful speech to Gideon about it and while at first he dismisses it, he comes to see the wisdom.

That’s not to say these are the only deep issues explored here. We learn that Dureena was sold into slavery by her family to clear their debts, that the memories remain fresh and are a major sculptor of her character. Matheson gets placed in the difficult position of either betraying a person’s wishes to save their life or allowing their death for what that person considers the greater good.

The planet that Natchok Var is rescued from is a desolate moon of a gas giant and has a thick, toxic atmosphere. The production crew do their best work so far in realizing this world – it’s thick atmosphere, swirling winds and electrical storms make this a claustrophobic, foreboding location.

While you have to think Galen’s help would have been invaluable, Gideon and Dureena work well and have fun together. There’s a mutual respect, with plenty of potential for surprising behaviors and methods between the two. Daniel Dae Kim finally gets a great scene all to himself – and while it verges a bit too much on the soliloquy, it’s powerful to see him reflect on the death that he was a part of. 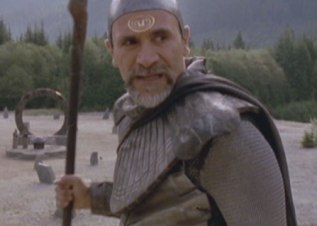 Tony Amendola is unrecognisable under his make-up, but his voice and acting abilities shine through, making Natchok Var a hugely sympathetic and likable character despite only having a few scenes. Most SF genre fans will know him as Bra’tac from Stargate SG1, where he was always a solid part of the guest cast. The Mozart montage is memorable and interesting to see him touched so deeply by an alien art form.

The meeting with the Ranger at the beginning shows once more the help the Rangers are providing, but that Gideon is willing to break all the rules and gamble his crew on a mission without any chance of rescue, if it may find a cure.

Although threatening in appearance, the Maratan ships do look very basic and texture-less, but not jarring enough to be an episode-ruiner or anything. The base interior on the moon looks like a generic slice of Downbelow. These the worst things I can think of in this episode…

I think the reason I like this episode so much is that it’s not trying so hard as many of the others. It’s not trying to get you up to speed on the plague, or Technomages or telepaths, it’s just trying to tell its story. It’s a story worth telling, which is told well, with good acting and an interesting central idea and message. That’s it’s almost completely self-contained and satisfying is even better. Is this episode better in this order? – YES

It doesn’t have any obvious problems with continuity.

(All images are property of Warner Brothers, except the image of Bra’tac from Stargate SG:1 – property of MGM Television)

< Previous episode “Racing the Night” | Next episode “The Memory of War” >