CAUTION: The following may contain spoilers

I had a thought the other day, I wondered if the studio where Babylon 5 was shot still exists in LA, and what, if anything, was left of it. I had the occasional daydream back in the 90’s of flying to the US and trying to find the place. Being a broke student from the UK made fulfillment of that a little difficult though.

I remembered they were supposed to be based well outside of the ‘glamour and glitz’ of the Hollywood studio system in an old, converted factory (a self-contained world you might say). This was completely in keeping with the frugal, outsider nature that Babylon 5 maintained throughout production.

The sign below was apparently one of the only outward signs during B5’s lease of this building, that something special was going on inside the bland, industrial estate facade. I remember seeing the ‘Sentient Xing’ sign in one magazine or another back then:

This is not the actual sign, but one that someone online must have done from an original photo – no source sadly.  JMS had a few words to say about it:

Funny thing about that sign…I came up with the concept and the design, and told John and the art department to come up with it after I saw a couple of people come near to being clipped as they came around the gate (it’s kind of a blind spot)…and that darned thing has gotten more photo exposure than almost anything else on the stage.

So here in 2014, the year of the show’s 20th anniversary, I decided to do a bit of Googling to see if I could track down the studio.

I searched “Babylon 5 studio” and “Babylon 5 filming location” which led me to numerous references in interviews of “filming in an old hot-tub factory in Sun Valley, California” or words to that effect. That was something of a start, but I was a little disappointed not to find anything specific about the location on the internet though.

Quickly looking up Sun Valley online, showed me that it’s a pretty large area to narrow down. So back to the internet… I found a few more references – one that it used to be an “Aqua Tech” hot tub factory, another it was in “a cul-de-sac, next door to a factory that made Orange Bang”

So it’s possible – Orange Bang, cul-de-sac… the bigger location next door has the potential to be large enough to house a tv show.

So I searched “Babylon 5, Tamarack Ave” which got me to the following link: http://jmsnews.com/forums/showthread.php?t=2789 and that’s a bingo! The address was: Babylonian Productions, 8615 Tamarack Ave., Sun Valley, CA 91352

D’oh. Didn’t think to search for ‘Babylonian Productions’. You live and learn. So there you have it, 8615 Tamarack Avenue, Sun Valley, CA – former home of Babylon 5 – on Google Streetview in 2014:

Pretty uninspiring it has to be said! Looking on Bing Maps (in particular their oblique aerial images) – shows what it might have looked like during B5’s time, with all the trucks:

From the reverse angle, you can see what seem to be trailers, probably for the cast of some production. Nice junkyard next door too: 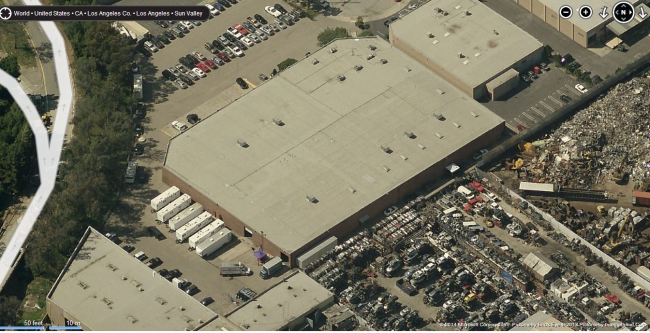 Apparently it’s been home for multiple businesses since, mostly entertainment industry stuff. It was home of Charlie Sheen’s Anger Management show, and while this seems of little relevance (although it may be what’s shooting in the images above), someone went for a taping of the show there and took a quick photo:

(image taken by EricW on Yelp)

Notice anything about the font for “Stage A”? Nice to see that some traces of B5 remain. I wonder what else might be there – Any old bits of set? A PPG that got knocked behind a radiator and is gathering dust? 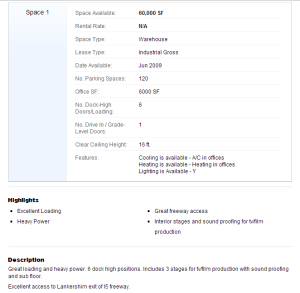 It’s good to know the place is still there. If anyone’s ever visited the location, I’d love to hear about it, and see any photos! Kind of funny to think one of the best tv shows ever was shot in such an un-glamorous locale. I’m sure if I’m ever in LA I’ll have to take a drive out to this anonymous-looking industrial unit, right next door to a scrapyard and a busy interstate, and my wife will think I’m crazy for the umpteenth time…

I wonder if JMS was on hand to shut the lights off when they moved out.

I posted this on Reddit’s r/babylon5 subreddit and got a very interesting reply from user eryntzun:

I was there just after they struck the sets on Crusade. Good to see old Big Bird hasn’t been changed any. They named each stage after a Muppet. A was Big bird, I think B was green so it was Kermit. C was pink/purple/blue I think, forgot the name of that. There’s a picture somewhere of Mira and Bill hanging out next to that stage, waiting for their scene.

The ceilings were pretty high, actually. They have to be, considering the White Star bridge was pretty tall and it was a swing set. This used to be a former hot tub factory. They ran the wires in giant wooden troughs above everything. Everything was made of wood, not too surprising since they didn’t bother to cover up the sounds of people walking on what is obviously wood. One year they came back for a new season and the Zocalo had become warped, because it was so hot that summer.

All that was left inside was the paint on the walls, a few pictures outside Kermit. That’s where the craft table was always for people to eat quickly during shooting. Otherwise it was outside in a tent for lunch. There were huge weird pencil drawings in the little rooms outside each sound stage where people would wait until the light was off.

The office of the person who gave us the tour still had scripts in it along with books full of all the props. I was allowed to look at props, but not the scripts because Crusade had not finished airing yet. The blue screen was still up inside Big Bird. It was to the side and part of the end of that stage. Stage C was for swing sets but it was a lot smaller than the others, but the doors were still plenty tall. You could also still see the tape lines for the Crusade sets where the prison cells were, etc.

JMS name was still on one of the parking places outside, and the Sentient Xing sign was still on the gate. If I knew where my photos were I would share. Not all that exciting though, pictures of empty stages with concrete floors and colorful walls. Bear’s empty prop cage and all that.

I recently came across British fan, Bruce Goatly’s set visit webpage which shows both the outside of the premises and inside during filming of the third season. It’s a wonderfully 90s website and thankfully still online. If you’re a fan of Babylon 5, do yourself a favour and take a look, you won’t be disappointed, but you might be a little envious that he got the chance to visit: